Social media is going viral with fake, edited photographs of cannabis plants and buds. You can see these photos in memes with taglines like “What would you name this…”. They’re also used to promote scam websites. Take a close look at this picture below: 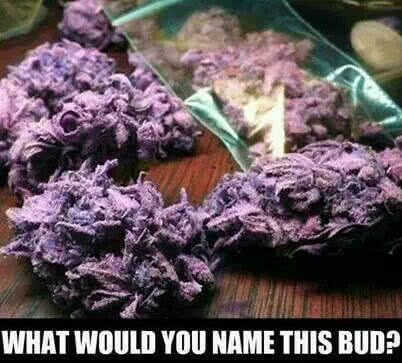 Notice how the plastic bag is tinted blue-green and the wooden table has specs of purple. Clearly it’s a fake. They just altered the hue. This color change effect can easily be done in photo editing program, such as Photoshop or GIMP.

While editing can bring out the best qualities in your photos, seeing unreal photos like the one above is a red flag that the person is scammer. I wouldn’t trust anyone who posts pics like these for real.

You can see how easy it is to edit the color of buds below. ▼▼▼ 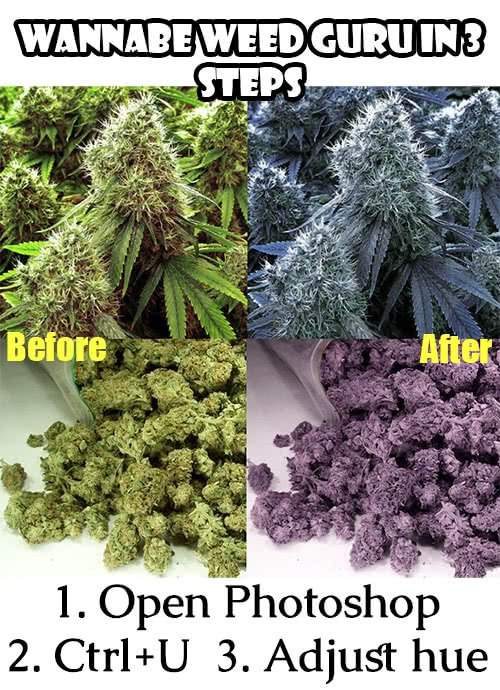 Don’t put up with bozos trying to promote themselves with fake buds. Share this pic and call out the phonies.

What to do in the case of a wannabe weed guru encounter:

If you’ve ever been around stoners, chances are you’ve met someone who knows everything about weed.

So you’ve just had a great harvest—yielded heavy, buds finished up hard and dank and the flavor is on-point. The dry and cure went well, now you want to share it with the community.

There’s always someone out there who wants to one-up you.

This is the state of the #cannabiscommunity #cannabisindustry. You can try to ignore the drama and the egos, or just deal with it. Here’s a few tricks to make the experience more pleasurable for everyone.

As soon as you get a whiff of drama, the best thing to do is retard the flame before it grows.

Unless you’re ready to debate bro science all night, you better take the high road—fast.

Pass over a joint to the brofessor and ask a serious cultivation question. For example, “How do you ensure your soil mix has a high cation exchange capacity?”. Chances are they don’t know.

You’d be surprised at how many self-made cannabis gurus can’t even roll a proper joint. Who’s gonna listen to grow advice from someone who can’t roll up a good doobie? The answer is nobody… and even through their thick egos, the gurus will realize this.

Gotta love those shaky hands, spilling bud off the sides of the paper!

Make it fun, debating with a King of the dank can be enjoyable…

The trick is to speak louder. Try to overpower other people’s conversations. And make sure they acknowledge your greatness—in growing, breeding and having the best weed around.

Record the audio and it will be gold LOL!

Nothing like a good dab to save the day!

When the conversation reaches the unbearable, then it’s time to bring out some potent cannabis shatter or oil. The stonier the better.

Load the almighty guru a fat one. Don’t shy out, this is your knockout punch. Make sure you tell them your giving them a good big one, and have everyone awaiting their monster hit.

After a minute or more of coughing, without a doubt, 90 percent of Wannabe Weed Gurus will have a dry-mouthed smile plastered on their face, forgetting that they were even going to say anything about growing in the first place.

Sometimes it is enjoyable to listen to a Wannabe Weed Guru. Get high off some chronic and enjoy a clown, the “master of growing” can be quite funny sometimes—that is, if you don’t have to deal with them for the whole evening.

Sooner or later, the grow expert is going to be contradicting themselves left and right, speaking like a drunk politician. Watching this disaster unfold serves for some decent low-class entertainment.

Why do you think reality television does so well? People love watching train wrecks. At the very least, letting the “2 year marijuana veteran” go on and on about how to grow pot correctly may be better than what’s on the boob tube.