How to get rid of spider mites on cannabis naturally. Prevent spider mites from ruining your weed plants during flowering or veg. 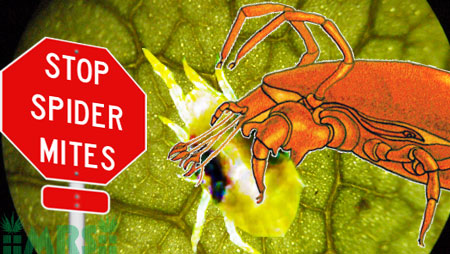 What are Spider Mites?

One of the more formidable pathogens a Cannabis shepherd must contend with is known as the “spider mite”. Spider mites are arachnids barely visible to the naked eye that feed by extracting fluid from plant tissues. Many species can reproduce quickly, hatching in as little as 3 days and becoming sexually mature in as little as 5 days.

Spider mites feed on hundreds of different species of plants, including cannabis. They commonly reside on the undersides of leaves but can also be found on buds. Spider mites spin a silvery web of silk threads in the manner of a spider, hence the name. Spider mites are known as one of the most frustrating cannabis pests to get rid of.

Spider Mites are Damaging to Plants

Plant leaves succumb to spider mite infestation quickly, causing mass die-off. Spider mites obtain their food by sucking chlorophyll from leaf undersides. Without hasty countermeasures or eradication, entire crops can be lost. Luckily there are many methods available for prevention and treatment if symptoms are diagnosed quickly.

While avoiding infestation is optimal, spider mites prey on a vast array of plants all horticulturalists will eventually come in contact with, including many yard and garden plants like juniper, corn, peppers, tomatoes, potatoes, beans, eggplants, carrots, strawberries, cucumbers, and cannabis.

Common Ways to Get Rid of Spider Mites

While acaricides like pyrethrum are effective, it is best to avoid the risk of plant tissue damage and residual toxicity in sinsemilla crops.

Modifying environmental factors can control mite populations but may improve the conditions for other pathogens, i.e., increased humidity and Botrytis. Controlled CO2 enrichment has been touted as “Generally dramatically decreased oxygen and increased carbon dioxide concentrations at elevated temperatures can lead to (spider mite) mortality at all developmental stages.” [source]

A contained “CO2 blast” can kill grown spider mites, though they won’t kill their eggs—reapplication is necessary within a few days. This debated method is praised by some, while many cannabis growers have found CO2 level modification for spider mite eradication utterly useless. Use extreme caution when handling and releasing CO2 —a concentration above 5000 ppm is known as dangerous to humans.

One sustainable organic remedy that has only recently become commercially available to cultivators is deploying predatory mites to hunt and kill your mites for you. Soldier bugs like Praying Mantis, Ladybugs, and Green Lacewing have been available for many years. However, they have not proven effective as they are much larger and do not prey specifically on mites.

Mother nature has proven time and time again that symbiotic relationships are always the best solution.

Predatory mites are comparable in size to their prey but move at much higher speeds and feed on many spider mites in short periods of time. P. Persimilis will feed so quickly they starve since their diet consists of spider mites alone. A. Swirskii has a varied diet, including mites, pollen, and even mold. Furthermore, it will also predate harmful insects such as Thrips and Whiteflies if introduced to the garden space.

There are clear advantages to plants by using predatory mites to kill spider mites:

How to Apply Predatory Mites on Cannabis:

Mites can be released at any time outdoors, but it is preferable to release them when lights are off if in an indoor grow space. Lightly spray the entire surface of the canopy with water and sprinkle the bottle’s contents, which will stick to the leaf surface. Depending on species, mites will be effective between 1–12 per square foot, so orders typically come in 500–5000 per.

Don't spray predatory mites with pesticides!
Both spider mites and predatory mites breathe through pores on their legs. Pesticide and oil sprays will block these pores, literally suffocating the mites while doing nothing to their eggs.

In general, a light spider mite infestation should be inoculated with a blend of predatory mites species at a rate of 2–4 per square meter. 5–10 per square meter will be effective for a heavy infestation. If preferred, sprinkle the mites into an envelope and secure it between branches to keep the carrier medium off the plants if flowering has already been initiated. Though it may not be needed, a second application is recommended after two weeks to eradicate potential stowaway eggs seeding future infestations.

Predatory mites can be procured online through Amazon.com or directly through supplier websites like naturesgoodguys.com and evergreengrowers.com. The order should arrive in under 24 hours, and the mites must be released within 18 hours of receipt. They will be stored within camera film-sized containers in a vermiculite or corn grit medium, or in slow-release bags.

Read Next: 6 Ways to Cure Powdery Mildew on Cannabis Organically

1 thought on “Predatory Mites: Get Rid of Spider Mites on Cannabis Organically”