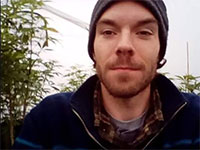 Bob Glob is a cannabis activist and hash connoisseur striving to bring you the latest info in trichome extractions! Check him out at PickYourSeeds.com

WHERE IT ALL BEGAN (Rosin)

So you heard about rosin… Here we go. Let me start from the beginning.

Hash Church Episode XXV ROSINTECH (March 15th, 2015 YouTube). We had all been happily watching Bubbleman and his gaggle of dabbers for weeks now, never to realize Soilgrown Sal would be invited on to share this new and soon to be revolutionary tech he had discovered. While pressing some bubble hash with a hair straightener to make it dabbable, he discovered ROSIN. 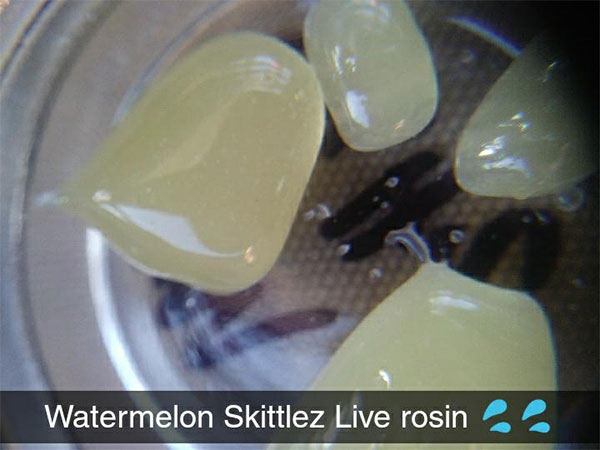 Rosin is by definition a softening of the trichomes through heat along with an extrusion of the softened trichomes via pressure. In the early days, all we knew was a hair straightener. Grab a bud, stuff it in some parchment, squeeze, and voila! Fresh, tasty (sometimes), and ready to smoke dabs! Very quickly the rosin press market developed. Some good, some bad, and most ugly.

How To Make ROSIN (Rosin Pressing)

The simply described way to make rosin is this:

Let me elaborate on all of these steps.
When selecting parchment, it is best to choose a natural or organic option, if possible. Allow enough room for the bud to “stretch” as it is squished and room for the oil to spread around the bud.

** An additional tech that came along is called directional flow. This method involves folding the paper so that rosin is directed off the heated plates and drips down the parchment, thus minimizing the time rosin spends heated.

The biggest key to rosin is the beginning product. High-quality fresh nugs and bubble hash will produce the finest quality rosin. Another factor is that every strain will produce different results. Start small, experiment, and with good results, continue. When pressing bubble or shake, use an unbleached coffee filter, tea bag, or specialized rosin bags like these on Amazon to prevent plant material getting into your fresh rosin!

When PRESSING, there are 3 KEY factors. TIME of press, and TEMPERATURE of plates and PSI! Since every strain of cannabis will react differently, you’ll need to play around with time and temperature to find what works best with your product.

How to Find the PSI of a Rosin Press

To find the PSI of your setup, take the pressure (tons, lbs, etc.) and divide it by the surface area of your plates. I would recommend staying above 1,000 PSI for an effective press.

When it comes to finding the best time and temp for rosin pressing, you weigh the benefits of yield versus terpene preservation. Nobody can really give you the best exact time frame; it’s something you need to feel out with the press you’re using.

🔥 Hot press is 190–240°F for 30–180 seconds. Hot pressing rosin gives an oily or shatter consistency. The terpene profiles may not be as carefully preserved, but yields are higher than cold pressing.

When collecting rosin, if the product is sappy, place it on a moisture-absorbing surface to stiffen. 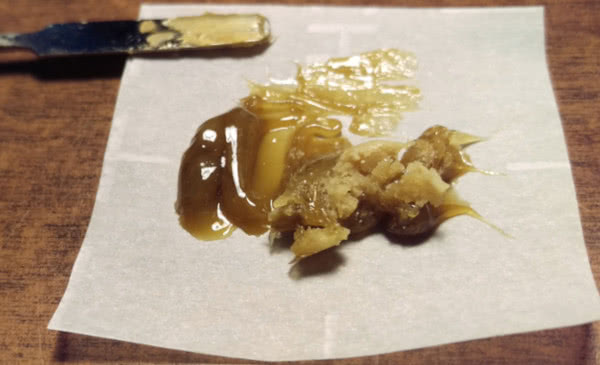 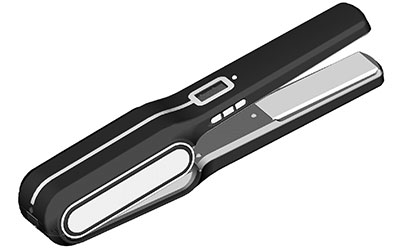 Any hair straightener will do. Try to find a model that can be turned down super low like this one on Amazon, but here’s the thing about using flat iron hair straighteners for making rosin. Eventually, you are going to break it.. One way or another.. You’ll stand on it, put it in a vise, and eventually it will break.

Temp guns are necessary because the temperature of plate vs. heater (readout on display) generally differs 5–30ºF.

As an alternative rosin pressing method, you can simply disassemble the straightener and remove all the plastic, leaving only two heated plates and a controller. Now how do you apply pressure? The best option to be found is a handheld “Quick Clamp”.

Build your own: check out this Reddit post for an example of the DIY hair straightener quick clamp rosin press.

This is a cheap hack to upgrade your rosin pressing on an affordable budget. An easy DIY rosin press setup consisting of heated aluminum plates pressed to 600 lbs (272 kg) of clamping force. Use smaller-sized 2″x3″ plates on a Dewalt Trigger Clamp or Irwin Hand Clamp. The DIY rosin plate kit below sold by Midwest Concentrates can be bought as a complete kit or plates only. 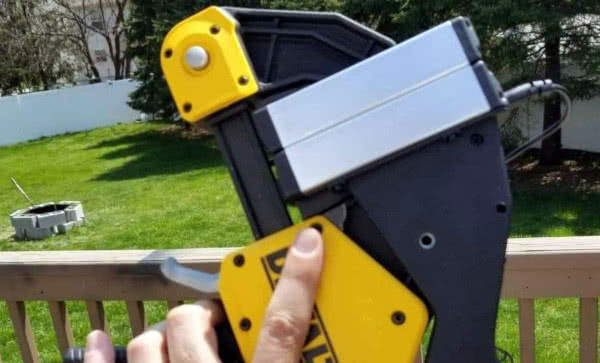 The Next Step
Now you’ve seen rosin made right in front of you, you’re excited to make more and more. You’ve gone through 4 hair straighteners, a roll of parchment, 2 ounces of bud, and you have barely any rosin to speak of.. If you want to process more than a gram or two at a time, you’re going to want to invest in a rosin press with a higher PSI. Simply put this is a shop press, bottle jack or hydraulic press with two heated plates.

You can fit a custom DIY kit onto a standard hydraulic shop press to turn it into a fully functioning press for making rosin. These DIY rosin press kits include rosin press plates, heating rods, double PID controller, and cords. 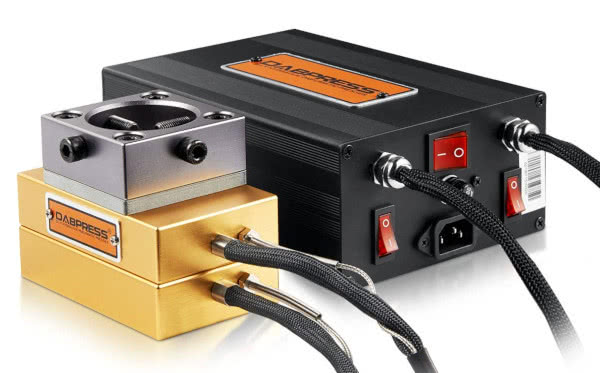 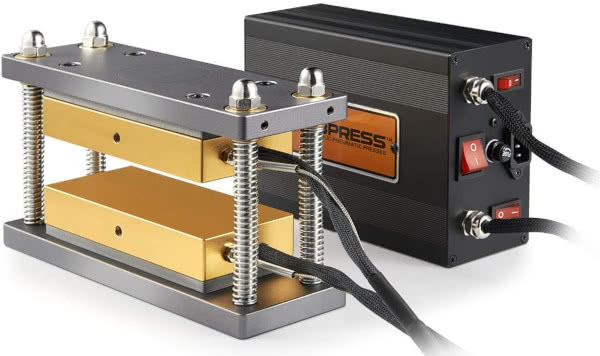 The next cheapest option and most reliable, but it will make you work for it. If you’ve ever jacked up a car, well this is the same jack. No extra features to worry about and total control makes this the best option for a beginner. Don’t forget your PSI! Have plates in mind before buying a press, or check the sizes when buying a kit. (**T-Shirt Presses and the like, do not work well for this reason) 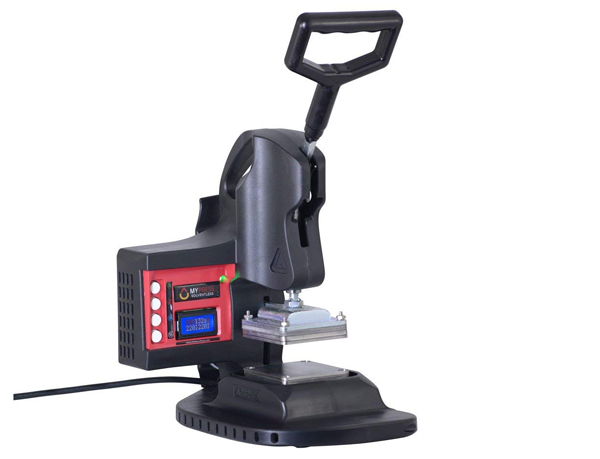 MyPress Gen 2 is a new release, portable 6-ton manual rosin press equipped with 3″×3″ heated stainless steel plates. Easy to use—just turn on, dial in the temperature, insert paper/flower and pull down the handle. A LED counter shows the elapsed time between closing and re-opening the plates so you can record the best settings for yield or quality. 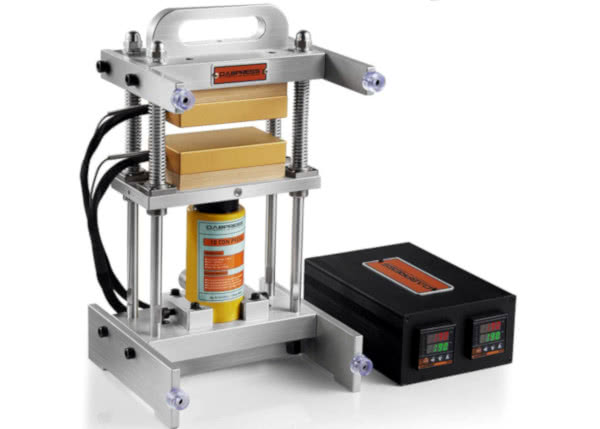 Hand crank and grip twist rosin presses are another manual design featuring high pressure, temperature-controlled heated plates put together into a plug-and-play, rosin making machine. You will want to bolt this model onto a secure surface for best results. 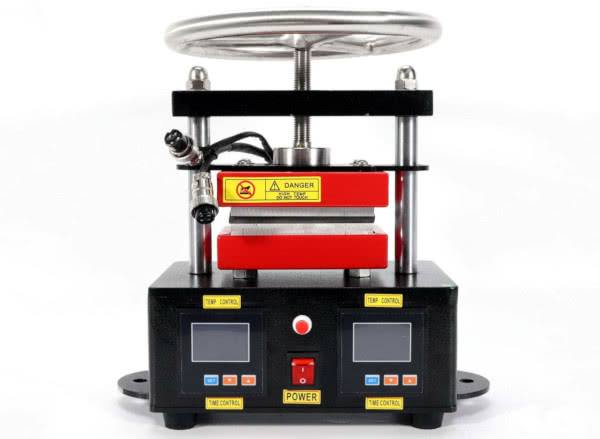 While a pneumatic rosin press will cost you a little more, this might be your best option if you’re looking to press rosin long-term Pneumatic rosin presses are easy to use. Simply press a button, and your press is activated! You’ll also need an air compressor to go with this one.

Hybrid electric rosin presses use electricity to power the hydraulic cylinder, so you don’t need to press it down by hand. Just switch the buttons to accomplish pressure-controlled or gradual pressing. These high-tech rosin presses are far from the most affordable, with many priced in the thousand-dollar and up range. 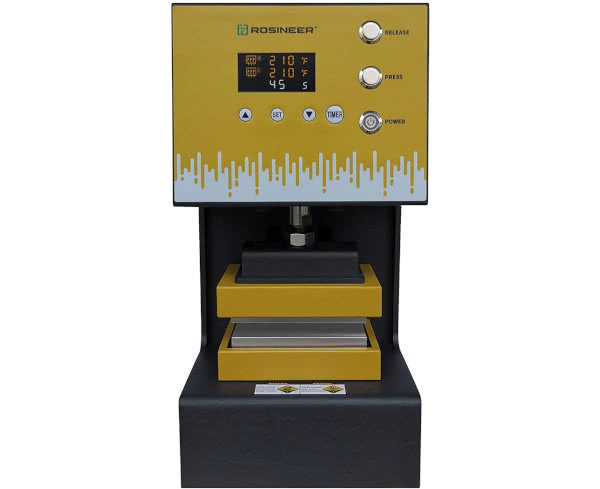 READ NEXT: Best Bubble Bags, How to Make Bubble Hash with Ice

Disclaimer: we do not promote or undertake in illegal activities.