My second-year guerrilla growing cannabis was when we first ran from the “pot bust” chopper—Operation Green Harvest Hawaii. We were strictly growing guerrilla crops then and treated it like a full-time job.

We germinated thousands of seeds in flat seedling trays. Each tray was filled with 100 seeds. These go out to the field once they grow over a foot tall. 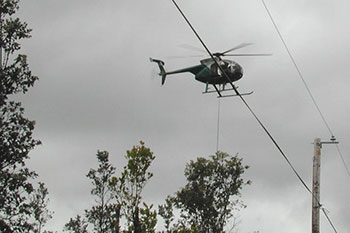 The Green Harvest chopper has a spray boom for destroying plants. It doses them with a mixture of diesel, or herbicide, and coloring. At other times, men drop down from the chopper to chop and seize plants.

Someone’s always on guard at our farm, and if you heard the chopper coming in “on the grind”, then you run out and hide all the seed trays as fast as you can.

Our grow areas are prepared beforehand, so transplanting is a pretty quick process.

Every few days, we go back to our patches, being careful not to make a clear path. Since we grow regular seeds, the job entails culling males before they seed the crop, along with providing water and fertilizer to plants as needed. Camouflage is the fun part. What we do in tall grass fields is prop metal fencing wire above the patch. You can pull and tie the surrounding grass to create a living camouflage over your crop.

In my first year growing, I had about a dozen patches planted this way—at least 500 plants between them. I didn’t have a vehicle, so I spent my days walking around the Hamakua Coast of the Big Island with my backpack containing slug bait, fertilizer, and drinking water. I had set up my patches close to gulches that had collected rainwater, so I could use that for watering the plants.

Unfortunately, I missed a couple of males, and they released pollen. For that, I paid the price. While not all of the pot was seeded, almost half of it was. I learned a good lesson, made some money, and was ready to try again.

Flash forward to my second year of growing, I replanted the patches and made more as well. It was going to be THE YEAR for me—I was trying to go big. Maybe it was greed that got a hold of me, but I started to disregard the camouflage tactics explained before. None of my patches had ever been busted by Green Harvest, so I figured I’d open them up more to get maximum light.

So I cleared out nearly all the surrounding grass in every patch. All was good for a week or so—and then it happened.

All of a sudden, we hear the sound of a chopper coming in low and fast! Whooomp! We hide the seed trays immediately and watch for what’s about to happen.

The chopper is LOW, flying barely above the tree line, not far from where we are. It’s Green Harvest for sure, equipped with the spray boom. I had two patches directly in their line of travel with some of my best plants. The chopper flew RIGHT OVER them.

The Green Harvest chopper circles around the area once and then heads out. I thought I was safe, I mean, the chopper didn’t stop, so clearly they didn’t spot it, right? Wrong.

So we run up there.

When we arrived, Uncle says my patches are WAY too open.

We start covering the patches up in any way possible—pulling whatever surrounding grass was left over the plants for camouflage and ripping grass with our hands to throw over them.

Just as we are covering the second pot patch, we the chopper coming back. Whooomp!

So we frantically run for the tree line.

We make it to some big Norfolk pine trees JUST AS THE CHOPPER FLIES IN. It’s now starting to circle our area. As this is happening, we move behind the trees, trying to stay out of sight.

After it circles two times, we decide to get out of there! So we run down the hill at full speed… Uncle actually tripped over an old refrigerator someone had dumped there, SLAMMING his shins into it. It looked very painful. But that didn’t stop him.

We make it back to the farm and look up towards the area. By then, the chopper had already left. We decide to wait a day before we go back and check—in case they had men on the ground waiting or someone else was up there.

The next day we head back out to the patches. I remember feeling very paranoid as if I was walking into a trap. We already planned some escape routes in case of an encounter. My heart was pounding, and I was sick to my stomach.

As we arrived at the spot, I got the ultimate surprise… ALL MY PLANTS WERE STILL THERE! They never found them. No spray, nothing! I got lucky… real lucky.

Looking back at what happened, there’s a lesson to be learned…

Letting greed control your guerrilla growing may get you busted!