In May 2016, Cannabis Care Hawaii, organizers of the Hawaii Cannabis Expo held the 2nd annual Free the Plant event in Oahu. The winner for the island of Hawaii, a.k.a. the Big Island, was Puna Diesel, entered by Professor Potgrower of Mtn. View.

The stinky sample defeated many delicious, top-grade, Hawaiian-grown strains, including a Pineapple that tested at 30% THC. Unfortunately, the Puna Diesel sample was not tested, but most joints are left half-smoked, so that tells you something.

Among the judges making the tough decisions at the prestigious event was Ed Rosenthal, a legend well respected for knowing a thing or two about weed. Even Joey Green Thumb said he preferred the Puna Diesel to his champion hybrid. But not everybody agreed, and Puna Diesel took a respectable 2nd place for the state and first for the Big Island. The Professor says he’ll enter it again in 2017. 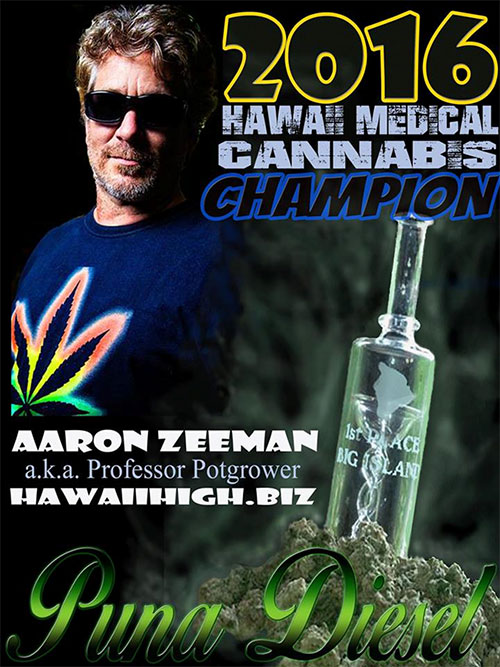 The Puna Diesel cutting is definitely Diesel but not just any cut. To understand Puna Diesel, you need to understand Sour Diesel. There is a difference… and there is a reason. Aaron Zeeman aka. Professor Potgrower

Sour Diesel is a classic ‘all-time great’ strain rated #3 on the High Time 25 all-time best strains list among others like OG Kush, Haze, and Blueberry. The origins of the strain date back nearly 30 years. There has been some debate about it where it exactly came from, but now the story is clearer. Sour Diesel comes from the classic New York City Diesel, a strain that rocked the East Coast for years, a.k.a. Chem Dog.

In the article True Origins of Chem Dog and Sour Diesel by Adam Dunn, Adam interviews those involved in the evolution of Sour diesel:

According to seedfinder.eu this is Sour Diesel’s genetic breakdown: (zoom in)

Adam says the Staten Island crew went to Holland “…in that batch was the Hawaiian Afghan from Sensi”. The Sour Diesel cross was with a Diesel cut. There were many ‘Diesel’ versions from different males; when The Hawaiian Afghani pollinated the Diesel (Chem Dog), so did other unknown males from Holland. Apparently, there were different cuts of ‘Diesel’ from different phenos. They were unrelated, “like there were different versions of Northern Lights like ##1, #2, & #5,…there were very different versions of the Diesel”, said Adam.

So it looked as if the mystery had been solved. Sensi Seeds Hawaiian might be the parent of the ‘Sour Diesel’ version, run by the New York boys from Staten Island. But that didn’t explain Puna Diesel’s Hawaiian connection to my satisfaction. There had to be more, something deeper, something about Puna Diesel. To be more specific, the origins of the Chem Dog. Actually, before that, the ‘Dog bud’ weed came from Oregon is the story. A fabled Northern Oregon lady that grew the Dog bud before it ended up at the Dead show. She is the Hawaiian connection. Did she know people on the Big Island? Is her weed part Hawaiian? Perhaps from Puna?

Further investigation is needed based on this new information. It would be of little surprise if the #3 all-time best strain is anchored in Puna genetics. It would explain a lot. “Diesel became a New York phenomenon”, said Adam. “I think your search will lead to Oregon, and that’s your Hawaiian connection”.

Over the years, cuttings of the legendary Diesel moved all over the country. Breeders tinkered, and variations of the strain became well known. With cuttings from ‘East Coast Sour Diesel, Amherst Sour Diesel, and others, many cut-only cultivars span the globe. The Puna Diesel cutting’s precise origins are still a mystery. Where did that mystery Hawaiian get his seed or cut? Genetic testing will one day narrow this down, and the mystery will be solved.

If I hadn’t given my buddy a cut, it would’ve been lost forever, the braddah I originally got it from…I haven’t heard from him in years. I wonder if he’s even aliveRon, keeper of the “diesel” aka Puna Diesel

The origins of the Puna cutting date back nearly 20 years. The cutting still exists today and easily produces more than nearly all other 8-9 week strains in Hawaii medical gardens. The plant is notoriously branchy and is perfect for SCROG grows and just begs to be thinned out. Unlike other Sour Diesels, the Puna cut doesn’t make giant colas but makes lots of medium-sized nugs with heavy yields.

After decades of propagation in Puna, the strain has adopted certain characteristics that make it a true champion of the Hawaiian rain forest. When most buds have succumbed to rot, a.k.a. “grey mold’ or botrytis, Puna Diesel can shake off downpours that total up to 120” (ten feet) of rain per year, much like another famous strain Puna Budder. Both of these strains showcase how a sativa dominant strain can finish relatively fast, produce gorgeous, uber-fragrant buds that make “one-toke choke smoke”, aka Da Kine. Puna Diesel will grow about 50% before finishing. Few can let it go a full 10 weeks because it looks plenty done with buds drooping if not tied up at week 9 and stinks to high heaven. Just brush up on a plant, and the scent permeates everywhere, even outdoors. 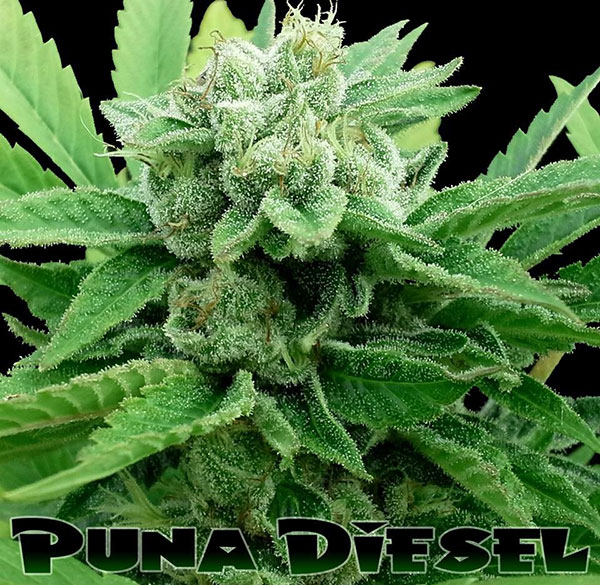 With pistils often light pink, Puna Diesel’s scent cannot be exactly placed as one of the above cuts. At the Hawaii Medical Cannabis Challenge, judges (Hawaiian growers) commented on how the strain tasted like “Puna”, a description difficult to define unless you have been to Puna Hawaii yourself. Yes, there are stinky/skunky tones that will alert cashiers that you got ‘Da kine’ on you. Yes, there is a ‘sour’-ness that screams limonene, but there’s a sweetness that coats the tongue. A flavor so strong, you taste it to the end of the roach.

The buzz:
Is strong, very strong. Sativa strong. But not the ‘false crack’ kine (Hawaiian slang for ‘Sunday punch’). Smoke too much, and you will go down but, you’ll be ‘over the rainbow’ high well before you smoke too much. With a tropical THC-V content, sky-high is what to expect from its Hawaiian heritage. Concentrates made from Puna diesel can approach full-on dream-like, acid trip highs. Not for amateurs.
The taste:
A sweet, tropical citrus…more than just stinky, lemon creme wafers. Not exactly lemonheads, not quite lemon pine sol, and not lemon Kool-Aid…but kind of, mixed with the scent of dankness. The lemon doesn’t dominate; it’s really only slightly sour compared to the sweetness. And there’s that taste of Puna, a flavor that persists on the pallet.
The stink:
It’s all about the stink. Not roadkill skunk but certainly not diesel ‘fuel’ either. A yummy, sweet skunkiness. The sweet stench is sure to give you away as the keeper of da kine. Hard to keep hidden from a nose that knows.

There are a few diesel cuttings floating around the state of Hawaii but only one Puna Diesel. There are plenty of growers who have Sour Diesel, but the Puna cutting originally known as ‘the Diesel’ came from a dude known as “Ron”. Ron is the guy who got it from a Hawaiian nearly 20 years ago. Ron dates the cutting around ‘96 and says it was nearly lost twice. “If I hadn’t given my buddy a cut, it would’ve been lost forever, the braddah I originally got it from…I haven’t heard from him in years. I wonder if he’s even alive”. Ron said he was glad the strain took 2nd in the state and first place for the Big Island. He was surprised to hear that his friend entered it. “I couldn’t believe he actually entered and won! It’s always been my best strain. Aaron is a great grower, so I’m happy for him and for the Diesel”.

Hawaiian cannabis is world renown. Ultraviolet light in Hawaii is much stronger than anywhere on the Mainland. On December 21st (shortest day of the year), Hawaii receives more U.V. light than California gets on June 21st (longest day of the year). Simple math, more U.V. equals more THC and not just THC but THC-V. The supercharged cousin of THC Delta 9 found in tropical sativas, THC-V gives the super stony psychedelic high that puts you into ‘cartoon land’. Puna Diesel contains THC-V. Sour Diesel has “Hawaiian” genes (DNL-see above). Seedfinder.eu guide says the Hawaiian is an Indica/Sativa hybrid (now known to come from Sensi Seeds) Puna Budder is Hawaiian sativa crossed with an Afghanica hash plant. This may explain why Puna Diesel has that “Puna” taste. Different environments allow for different phenotypes in cannabis. Kush strains are notorious for various expressions depending on environmental conditions like location, elevation, temperature, hydration, and soils. After growing in Puna for nearly 20 years, it seems Puna Diesel is at home on the Big Island.

The whole story on Sour Diesel has yet to be told. Adam Dunn has a special, part #2 on Sour Diesel on Friday, July 9th. He will be interviewing Hal, the guy who actually planted the very first Sour Diesel seed. (Adam Dunn Show)

But there is more to the lore of Puna Diesel than its origins. Near 19.5 degrees latitude, the District of Puna lies in a special place according to Dr. Richard Hoagland who claims that anomalies occur in hyperdimensional physics at that location on large spherical masses (Earth, Mars, and Jupiter) and in computer models. According to “hyperdimensional physics” theory, this higher energy should appear at 19.5 degrees from the equator of the rotating planetary body. If you look at our solar system, Earth’s largest active shield volcano, Mauna Loa, lies at 19.5 degrees north; the largest volcano in the whole solar system, Olympus Mons on Mars, lies at 19.5 degrees north; and the biggest and longest-lasting surface feature on Jupiter, the great red spot, lies at or very near 19.5 degrees south. I believe there is also a large atmospheric disturbance on Neptune at about 19.5 degrees from its equator, though I’m less certain of that one.”

The theory is that the ‘magic’ of the Island of Hawaii is not just make-believe or Hawaiian legend. Perhaps, somehow, hyper-dimensional physics has played a role in a plant’s chemistry or morphology on the island. Plants like coffee, orchids, and anthuriums are known for being of the highest quality in the world. Puna is a special place within a special place. Puna Diesel is that kine special.

Hawaiian-grown ganja is exceptional and for many good reasons. Between genetics, the sun, and the islands’ magic, it’s easy to agree that it is the world’s finest. Among many great strains like Puna Butter, Maui Wowie, Kauai Electric, Kona Gold, and Molokai Madness comes now Puna Diesel, 2016 Big Island Champion.

If you ever get to Hawaii, take a cruise to the Puna side of the island. See the volcano and flowing lava, enjoy the rainforest and get some of that good Puna weed for yourself. If you’re lucky, you might come across the real Puna Diesel and taste the magic. Or come to the Free the Plant event July 19th on Oahu and meet the Professor in person at the Aloha cup 2017.

9 thoughts on “Puna Diesel the story.”

Disclaimer: Hi, Jared Cox here. I am disclosing that I’ve included certain products and links to those products on this site that I will earn an affiliate commission for any purchases you make. My goal is to provide the best information for you while growing this site, but please understand I am doing this as a for-profit business. Please note that I have not been given free products, services, or anything else by these companies in exchange for linking to them on the site - the only consideration is in the form of affiliate commissions. Read the full disclaimer & privacy policy here.