Cat Piss is a marijuana strain that comes from the Puna district of Big Island, Hawaii. The strain is named such for its overpowering stench, which smells like cat piss.

While its funny name might leave users wondering what exactly went into it to make that unusual aroma, you can rest assured that Cat Piss does not actually have urine in it… or at least we hope so!

The Hawaiian Cat Piss appears as a mostly indica plant. Its genetics are believed to originate from Afghani crossed to Diesel. Locals and newcomers in the area love this strain, as it’s a mold resistant indica that can be grown in one of the rainiest areas of the world.

If you want to get a hold of real deal Cat Piss, you may have find it yourself. It’s a popular strain grown in Hawaii.

Cannabis growers who camp alone in the wilderness might know a thing or two about Blue Balls. The strain, I mean.

If you like blueberries and you love balls, then this strain is for you. Blue Balls is a cross between the all-star strain DJ Short’s Blueberry and the classic Chemdawg. One wonders where the “balls” in Chemdawg come from. One of the great mysteries of cannabis.

This hybrid’s effects are described as relaxing and sedative—potent with mixed heady sativa and heavy indica effects. Having Blue Balls doesn’t seem so bad after all ;). Good luck finding a clone.

Worth noting that Blue Balls is not directly related to the other familiar “ball” strain, Purple Monkey Balls (GDP x Afghan).

If you’re looking for a strain with some kick to it, well, look no further. Chuck Norris Black and Blue Dream kills two stones with one bird. There used to be a street with the same name, but it was changed because nobody ever crosses Chuck Norris and lives.

A select phenotype of the famous Blue Dream strain, Chuck Norris Black and Blue Dream is somebody’s clever joke and/or marketing tactic. Blue Dream was and always will be a legend in West Coast commercial growing for its productive size and yield capabilities, as well as high-quality fruity buds.

Rising to popularity in early 2011, the “Black and Blue Dream” gained recognition in LA dispensaries. Although the meme legend himself never approved the use of his name for this strain, apparently, no legal actions were taken. Many dispensaries now are careful in marketing strains that could present potential problems to their business.

“Chuck Norris Black and Blue Dream” is hilarious in every way. Can anybody even compete with Chuck Norris buds? It seems like unfair marketing to me… LOL! 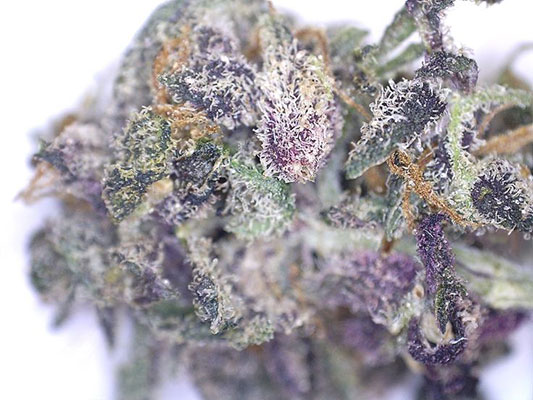 Another one of Hawaii’s famed pakalōlō strains, Donkey Dick is a big fat single cola bud plant. This tubular plant has earned the name Donkey Dick for its characteristic large and thick structure.

Most say that the original Big Island Donkey Dick is a type of Skunk variety acclimated to the Hawaiian climate. Outdoors and indoors, these indica dominant plants can yield very heavy, especially when given a long vegetative cycle. It takes roughly 8 weeks to flower.

You can do some digging and find some Donkey Dick clones or seeds around. Seeds were available years ago by a few different breeder companies, and the Hawaiian Donkey Dick strain you can find around locally. 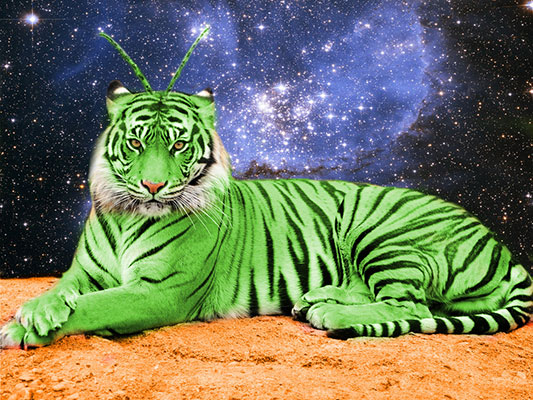 Whatever this strain’s name means, something or somebody is certainly spaced out. Is it a “really high guy” meme?

Crouching Tiger Hidden Alien is a cross between Tiger’s Milk and Starfighter cannabis strains brought to earth by Exotic Genetix. This space-age chronic exotic weed strain is definitely worth getting a hold of.

Yes, you read that right. Charlie Sheen, also known as Charlie Sheen OG, is a strain of pot. Two and a half thumbs up for this one.

Charlie Sheen is a hybrid cross of the American cannabis strains OG Kush, Green Crack, and Blue Dream. All winners, all-star dankies. The hard-hitting indica qualities of these strains come out and pack a punch, and what makes it even harder is the over 20% THC levels the Charlie Sheen strain contains. The crazy effects are hinted at in the name of this strain.

Indica 70%/Sativa 30%. Charlie Sheen is highly reviewed for its premium quality top-shelf buds, potent with a lemon and pine aroma. Flavors are comparable to a sweet kush strain.

You can find the Charlie Sheen strain in clone form if you are lucky. Seeds, on the other hand, are hard to come by—with no marketed ‘Charlie Sheen’ cannabis seeds available. You can get the parents and make your own Sheeny genetics. 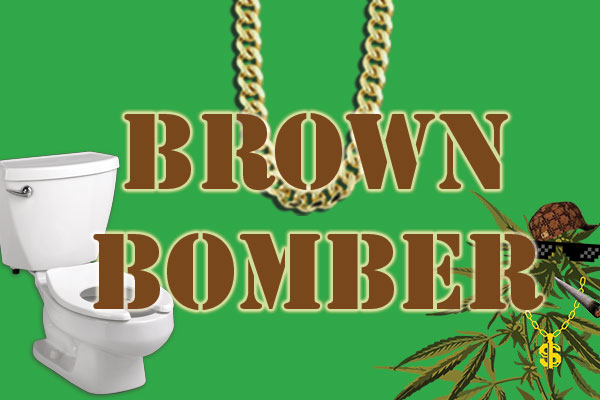 Brown Bomber is a strain of cannabis made famous by the American comedy film Grandma’s Boy. The overwhelmingly powerful effects of Brown Bomber marijuana are said to affect the bowels.  In other words, “When you smoke this, you’ll sh*t your pants.”.

The “Brown Bomber” name is likely Hollywood fiction. Have you ever tried a strain with such a crappy effect? Let us know in the comments!

“I don’t want any of the brown bomber, I already sh*t my pants this week.” 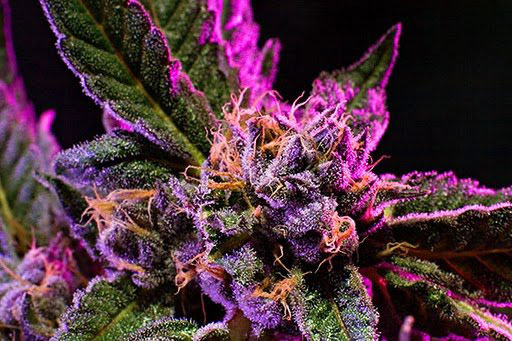 Grandpa’s got that super chronic—and it’s the purp! Grand Daddy Purp’s full-bodied indica stone may have you lost in Parkinson’s world. Super stoney!

Ken Estes takes credit for the Grand Daddy Purp strain and name. How much of this is true is not clear, but the strain his company (also named Grand Daddy Purp incidentally) produces is no doubt next-level quality cannabis. It’s funny how the company writes their product descriptions… like their strains are holier than holy, but once you know the GDP, you’ll love it.

GDP, for short, is also short in stature, an average growing strain that is easily outperformed by other top strains. But wait! The lowered yield per plant doesn’t stop growers from loving this strain. Quality is the name of the game. GDP’s aroma is heavenly, fragrant floral, and sweet, while its large buds are frosted with resin. Bag appeal is out of this world!.

Grown in the humid Hawaiian rainforest, Grand Daddy Purp (mostly indica) held up to mold (Botrytis) and other outdoor conditions better than some of the most popular modern cannabis hybrids. If you’re lucky, you can find GDP seeds in stock online. 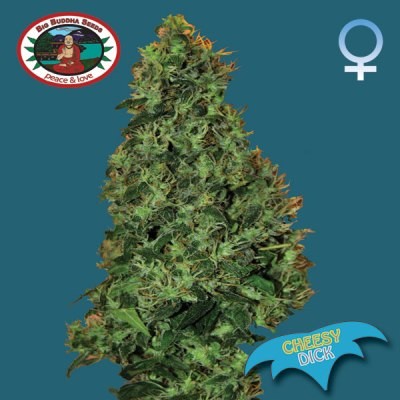 If Donkey Dick isn’t enough for you, Cheesy Dick, or better yet Dick Cheese, is just what you need in your life. Yes, the Cheesy Dick strain, please.

Jokes aside, Cheesy Dick buds are dank indica—large, dense, and lumpy, with a pungent cheesy aroma. Its effects are good for relaxation. The hard and heavy indica Dick Cheese stone will knock you flat on the couch. Expect red eyes, munchies, and dry mouth.

“Cheesy” refers to the strain’s parent Big Budda Cheese, and the “Dick” comes from the other parent, Moby Dick. This Cheesy Dick hybrid is super quick flowering at roughly 56 days and is almost purely indica. 95% Indica / 5% Sativa. Give the Cheesy Dick a chance!

I didn’t know if Cheesy Dick and Justin Bieber Kush happened to be the same thing or not, so more research had to be done. As it turns out, JB Kush, big in ’11, is a mostly indica hybrid created by a Canadian breeder/company named Dank Depot.

JB Kush comes from the streets of Toronto. It carries the slogan “To help you get through those tough times with your loved one, and make you closer.” Whether you like the artist, this kush strain is named after or not, saying you have “Justin Bieber Kush” or “JB Kush” is pretty damn funny.

The JB Kush strain tests up to 17.5% THC with low CBD levels. It’s most likely another variation of the acclaimed OG Kush, slapped with pretty boy stardom.

The Biebster himself has not commented on using his name for a cannabis strain, although some sources say that he’s angry… Is it too late now to say sorry?

What are your favorite funny strain names? Enter your name and write a comment below. ▼▼

Disclaimer: We do not promote or undertake in illegal activities. Know your country and local laws before purchasing seeds online. Read our privacy policy for more info. 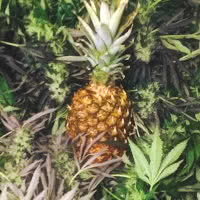 About the Author: Jared Cox

Jared Cox is the author behind Mold Resistant Strains. He is a cannabis grower, breeder, and archivist of seeds. His work across several disciplines extensively covers cannabis genetics, cultivation, processing, and sales.